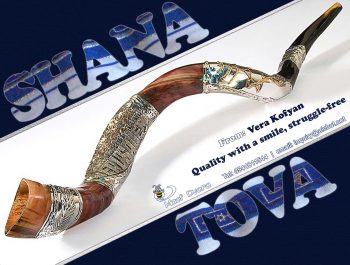 The New Jewish Year is almost upon us, and I would like to wish to all the Jews (and the non-Jews) a Good and Blessed Year! Shana Tova!

In designing and formulating this year’s greeting and its card, I have chosen to say something completely unrelated to all the tradition and the interpretation, to scripture and Kabbalah. This year I shall not share with you lessons I have learned in Judaism and new insights on my own Jewish journey of discovery.
Instead, I have chosen to speak of something most current, which is not, in itself, new, and by no means born of this century, but in its specific context of the Jewish people and our country – we are witnessing some new heights.

I am talking about the rise of world anti-Semitism, and specifically – its reflection in the intentional attempts to rewrite history by the anti-Semitic factors.

Over the course of my life I have encountered plenty of anti-Semitism in different ways and from different directions. I have spent my childhood in the USSR, where the “brotherhood of the Peoples” meant just that all these “brotherly” Peoples unanimously hated the Jews. We have been regularly beaten and ridiculed; we lived under limitations, open and well-known to all, but treated as if they just did not exist and surely weren’t government-sanctioned.

But this sort of anti-Semitism does not scare me. It makes the Jews stronger, more resilient and creative. It keeps us from assimilating into the other Peoples and disappearing, it helps to keeps our Jewish character. Largely thanks to that sort of anti-Semitism we still exist, through millenia, as a single known example of an ancient people who still retain the same language, the same traditions and the same faith for thousands of years. History knows no other such example.

What we have seen this year is a completely different manifestation of anti-Semitism. It is a mass-insanity, the theatre of the absurd par excellence, a general madness. As if the whole world has suddenly gone mad and turned upside-down.

We know for quite a while that the UN is an anti-Semitic body, dealing mostly with delegitimization of Israel and damaging it in every possible way. However, the heights which the current attempts of rewriting history has reached, outrageous attempts to change documented facts known to all, I have never witnessed before.

Lies shall never bring anything good to this world. A structure based on lies will crumble, like a house of cards. There can be no quality of life, if we just stand aside and allow this, if we do not stand strong against this growing phenomenon, supported by government and international institutions. We shall continue to state the truth and bring the documentation proving it beyond any doubt.

If we wish to have quality in our lives, we cannot allow life based in a lie. And to understand where the truth ends and the lie begins, we need to study history. There is no truth and no flow of processes without a strong foundation. There can be no solution to problems without true, solid basic assumptions. Thus we must never buy the lies nor give in to them; we mustn’t repeat them, repeat the words or phrases coined from them, sounding as if we support and strengthen them.

This is why this year, I wish for us that all the Jews of the world draw about themselves their talits, and sound the shofars with all their might, to open the gates above. And the cry shall be heard of our outrage against the blatant lies, and people will say – “Enough! No more!” – and mean it. And this cry will be heard by all the Jews, and they come together and unite, and come home to Israel, and work together to return sanity back to the world like only a unified and unique people can do.

Shana Tova! May we all have a good year, in which we see a decrease in hatred, hear the truth spoken out loud clearly and with no fear, and witness the return of sanity!

See the greeting card I designed for you- on top of page.