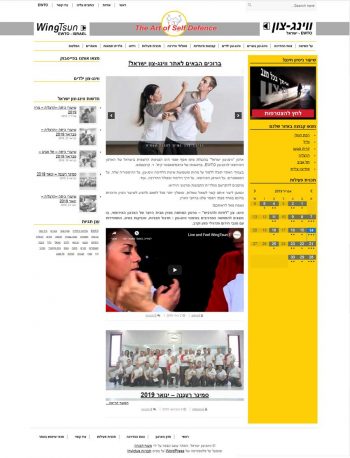 This website has taken considerable time to complete, due to various reasons, but it is finally live: Sifu Asaf’s website, who is a gifted trainer for a martial art – Wing Tsun.

Sifu Asaf Agami is the official representative of the European Wing Tsun Organization (EWTO) in Israel. He and the students in his organization are operating several locations of his Wing Tsun school all over the country.

He teaches children from a very young age and is a teacher from God. My son trained with him since he was 4 years old, and the experience was just amazing.

He teaches in schools for the gifted, such as the one in Karmi’el, and for those with disabilities, as well. His classes are for both men and women of all ages and abilities. The martial art’s benefits are not limited to self-defense abilities their students develop, but much more.

This project is a good example of working within severe limitations. Asaf knew e-x-a-c-t-l-y what he wanted, and my creative freedom was somewhat curtailed. 🙂 We also had design limitations dictated from the EWTO, such as the colors and layout to use and other instructions. Within these limitations, I did what I could to create for Asaf the Internet presence he wanted. As it happens at times, the preliminary definition of the website has changed during the building process, the goals and purpose became clearer, and things changed. All this contributed to the fact this work has taken more time than first estimated.

But the most important thing is Asaf was happy with the result. You may visit his website here.