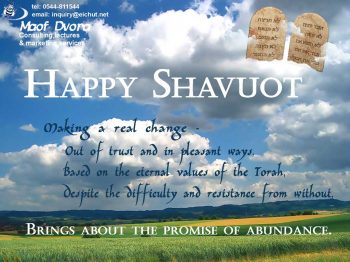 Last evening, Saturday night, we have marked the end of Shabbat and the beginning of Shavuot, the Time of the Giving of the Torah.

In the synagogue we chose to affiliate ourselves with, of the conservative community of the Minyan Masorti Kfar Wradim, we have celebrated with a community dinner and then studying together until nearly midnight, on themes to do with Ruth Scroll and the Giving of the Torah. [If you are not familiar with the differences between the different Jewish movements except for the binary civil/orthodox – I suggest you learn the principal differences between the Orthodox, the Conservative and the Reform, to begin with.]

I would like to share with you the realization that hit me, resonating so well with all I knew and understood before about the Torah, and in the spirit of which I have designed the greeting card way before last night’s study session. This inspiration appeared during the second and last part of the study session, in which we have read a Talmud page on the importance of the Giving of Torah at Mount Sinai, which was directed by Natali Lesterger, a candidate for Rabbi for our congregation. To clarify: I do not, God forbid, aim to turn anyone back to Judaism, read a sermon or prove anything about practicing the orthodox blind obedience (which is completely alien to me). I only wish to share an inspiration, connecting harmoniously to all I have realized before about the world: including Quality Assurance, education, coaching and many other things, constituting my way of seeing the world. And for this I am very grateful today.

During the last dozen of years or so, I have the growing realization that the Torah is a manner of User’s Manual for good, long, healthy life, including abundance in every way. The choice is whether to follow it – and then there is a promise to enjoy said abundance – or not. However, it is not a bar style of meal, that is to say, if you chose to follow (a), (b) and (n) and disregard all else, there is no promise of same abundance. There may be, there may not be, it is unclear. Perhaps – in part, yes, but there are no promises. It is formulated so gloriously in Proverbs 3:18: “She [Torah] is a tree of life to those who take hold of her; those who hold on to her are blessed [happy]”.

When you buy a car or a machine of some sort, it comes with a User’s Manual, working much in the same manner. If you use it not according to the manual, then is no warranty, for it is unclear what would happen. Could be – nothing, and could be – a major malfunction. In any case, it is on your own responsibility. And you are fine with it, aren’t you?

On Shavuot the Jews give thanks for being granted the Torah, the tree of life. And I have been told that the Kabbalistic meaning of Shavuot is making a true change.

The Midrash we have seen last night states that the very fact of the whole world, the entire creation, depended on the People of Israel choosing to receive the Torah at Mount Sinai. I shall not weary you with the details and particulars of what each Rabbi said, to whom and why, only the bottom line. These are the Ultimate Rules for good, long, healthy life of abundance  in every possible way. This is the promise, on one condition…

Which connects perfectly to the realization that the Torah is a User’s Manual. And the condition is that we use what we have been given as instructed. But not only this. We know, we are eventually to serve as “light for the other Peoples”, which means that we chose (yes, we weren’t chosen but we chose, and we keep chosing to this day, every day) to use what we were given in this world as instructed – or not, – and reap the results, accordingly. And when we shall choose to use them as instructed, we shall be able to show others, that the instructions work.

Now, we know the do. Throughout history the success of the Jewish people is against all odds and despite all logic. We are the oldest people in the world with the same traditions, same language, same history as thousands of years ago, and that despite the fact that “every generation they rise to eliminate us”. We also know that the farther we come from these instructions, the worse our results, the less abundance in every way, the more “troubles and tribulations”, the more difficulties and complaints. Once I had a hard time to accept such a concept, but now I know it is true, and see support for it everywhere.

But the most important thing I understood last night was this: the Torah was not given only to us, we are simply the ones who chose to accept it. It exists and is available for all who wants to take it and use what they’ve been given, according to the instructions. The promise also exists in alignment with the rules. It is not a prize, given to us for good behaviour by a deity. It is our own promise to receive the wanted result via correct exploitation. For the whole creation, the whole world, depends on the ability of people to live s good, long, healthy and abundant life. The less our lives are aligned with the rules – the greater the catastrophes. Not just for the Jews – for everybody.

So I would like to wish you all Happy Shavuot, and to understand how to make a true change in our lives, so that we may use what we have in this world properly, as instructed by the Torah. Which is not self evident, as thousands of different interpretations prove. Look for the interpretation which is most harmonic for you and most resonates with the above, and go for it in your own time, on your own understanding, with or without believing in God in this or other way, whatever works best for you.

And then, as promised, you shall achieve balance, harmony and abundance in all possible sphere.

I have designed a special greeting card for this holiday, see picture at the top of the page.